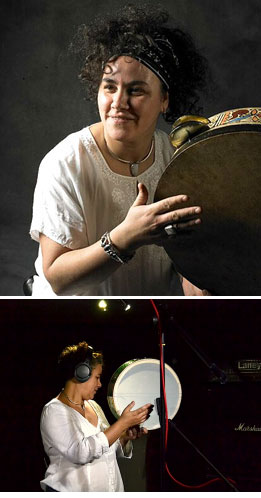 Mouna was born in Meknes, Morocco. She’s from a family of musicians who for generations have been involved in the traditional and even mystical styles of music from that region.

Mouna is an outstanding and versatile vocalist and percussionist.

She studied at the “C.I.A.M.” music school in Bordeaux, France and was at the same time taught by and played with visiting musicians from Cuba and Brazil. She has also played with “Macunaima” one of France’s top samba schools with whom she played an active role in carnivals and stage performances.

In the UK, she was  a founding member of The Moroccan’Roll Convention, played extensively on the London scene with “Haleshla” and played and toured with artists such as Hassan Erraji from Morocco.

Mouna now runs a guest house in Morocco www.riadlahboul.com and courses based around Moroccan culture (music, dance and cookery). She also finds the time to teach and play music professionally!

She is currently working on the new Syriana album “Syriana 1325” and “Chaka Chouka” with Haji Mike, Bernard O’neill and Simon.

Any cookies that may not be particularly necessary for the website to function and is used specifically to collect user personal data via analytics, ads, other embedded contents are termed as non-necessary cookies. It is mandatory to procure user consent prior to running these cookies on your website.